by Colleen
in Insider Info 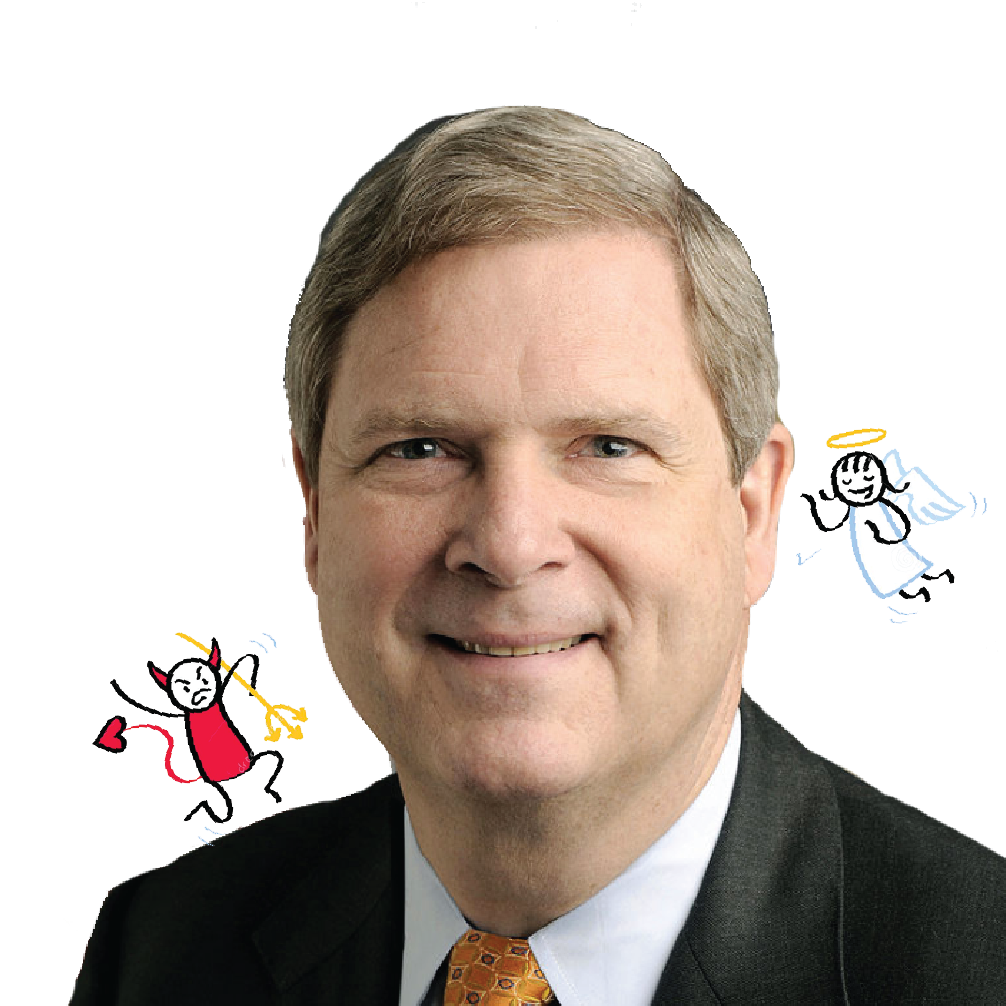 Gov. Tom Vilsack has his work cut out for him. Tapped by President-Elect Joe Biden to head USDA, he will surely be confirmed and take the helm at perhaps the most depleted and most important federal department in the U.S. government.

Vilsack’s Record on Protecting People in Need Is Exemplary

There is cause for hope. Holding the same position of Sec. of Agriculture throughout nearly the ENTIRE Obama Administration, Vilsack was a champion for people needing food assistance and the programs that support them. Never in 30 years of working on child nutrition programs have I seen such impressive, groundbreaking legislation as the Healthy, Hunger-Free Kids Act. With the strong support of Michelle Obama and Sec. Vilsack, it ushered in improvements in nutrition, access, and social justice to food assistance programs like school lunch. Even more notable was the work of the USDA’s career staff in implementation of the new law. Their attention and care has resulted in some of the most excellent rule making and guidelines I’ve seen, to the betterment of families in need across our country. Research backs this up. A 2019 USDA report shows the collective efforts of all involved in this revolution in school food resulted in healthier, more appetizing food and happier kids.

But His Work On GMOs and Black Farmers Is Not

And, though the focus on this article is on opportunities, I would be remiss not to acknowledge the blow to the head some in the regenerative farming, non GMO, and the black farmer movement are feeling from Vilsack’s new appointment by Biden.

In the Obama Administration, Vilsack shortened the time to approval for new GMO crops from over two years to under one, earning him the nickname “Mr. Monsanto” in some circles. And investigations of his claims of increasing the number of black farmers by 9% during that Adminisatration suggest the accomplishment was actually creative data manipulation. In fact, USDA foreclosed on black farmers who were pursuing active discrimination suits against the Agency while Vilsack was at the helm. Ouch.

Vilsack has made a career of catering to the whims of corporate agriculture giants — some of whom he has gone to work for.

Is Vilsack Devil or Angel?

But Vilsack was hardly “in the pockets” of corporate agriculture during his tenure, as some assert. In addition to championing for food stamps and other federal nutrition programs, he supported measures to improve organic standards. That is why the anti-hunger group Food Research and Action Center and the Organic Trade Association issued press releases this week supporting his appointment.

Based on Vilsack’s record under Obama, we should give him support and space to become the best agriculture secretary the people of this country have ever had. But, he is going to have to take a side. Vilsack cannot save American agriculture without putting consumer health in front of corporate agriculture profits, not just him, but everyone at the USDA.

In my experience, any secretary in the President’s Cabinet outside of the Department of Defense, can reform only one core function or philosophy of the department while in office (typically they have at most 3 years to accomplish their #1 priority, though Vilsack had an unprecedented 7.5 years under Obama). So they have to choose wisely. There just isn’t enough time or political capital, and each issue brings a new group of foes working to undermine it. They need to focus.

Vilsack’s long-term focus should be to change the mindset of the USDA to that of a consumer advocate instead of protector of corporate agriculture quarterly profits. The staff should be instructed to use the lens of consumer health to guide everything from research, policy, loans, and food assistance.

Does Visack Have to Take On Enemies in Big Ag to Support Consumers?

To be sure, having a consumer focus does NOT mean throwing corporate agriculture to the wolves, a politically impossible thing to do if he wants to stay in office (just look to see how much money big food donates to both political parties). It means that every decision is guided by the question, “will this improve the lives of consumers?” And what consumers, aka people, need is healthy, clean food that nourishes them and the planet they live on.

You may rightfully ask, aren’t farmer interests the same as consumer interests? That was true when the USDA was founded and most Americans were no more than a few miles from a small family farm, if they weren’t actually farmers themselves. And that is still the case for some. But corporate farming has quarterly profits as its primary motivation. So anything Vilsack does to support corporate farming will be at its foundation supporting short term profit gains, not to improve the lives of consumers. The two can overlap occasionally but the motivation behind decision-making matters significantly over time.

In addition to the long-term focus to rebuild the foundation of USDA to support the health of the American people, there is opportunity here for Vilsack to correct some of his and the Trump Administration’s past actions in the magical first 100 days. Here’s my short list.

1. Restore research capacity, which has plummeted 90%.

The Trump Administration moved the two major research arms of the USDA, the Economic Research Service (ERS) and National Institute of Food and Agriculture (NIFA), from the Washington DC area to Kansas City in 2019/20, together about 600 positions. In doing so, they lost most of their research staff, who chose not to move from the Department. USDA has not been able to replace most of the lost staff in Kansas City, and decades of important research has come to a halt. In a recent interview, James MacDonald, a former senior economist at ERS said, “Everybody that was doing [work] on seeds, chemicals, and precision agriculture left—so all that work is wiped out completely, we had a significant amount of work on the health and environmental impacts of industrialized livestock production. That was wiped out.” Vilsack should move ER and FSIS back to the DC area so it can better serve USDA and Congress.

“Everybody that was doing [work] on seeds, chemicals, and precision agriculture left—so all that work is wiped out completely, we had a significant amount of work on the health and environmental impacts of industrialized livestock production.

James MacDonald, senior economist at the ERS in interview with The Counter

2. Make a statement of intent to promote regenerative farming over chemical farming.

Chemical farming is destroying our farmland, waterways, and even the air we breathe. Use this as a launching point: Because of the rapid proliferation of Round Up resistant weeds, glyphosate may be moving out of the #1 weed killer position in the U.S. as the use of atrazine climbs. You may remember that glyphosate was a supposedly safer alternative to the arguably more toxic atrazine, though the latter is still the second most popular weed chemical. Well, Atrazine is on the rise because it can help farmers control Round Up-resistant weeds.

Mothers hold onto your fetuses, and frogs hold onto your testicles. Atrazine is not something you want leaking into your water. Atrazine is associated with birth defects and slow fetal growth among other health problems and can chemically castrate frogs. In the first 100 days, Vilsack should announce he will put together an emergency plan to provide support and incentives to shift a majority of US farmland to regenerative agriculture in the next 10 years.

3. Say to the press, “consumers have a right to clean food.”

Enough of this whack-a-mole process banning of one toxic agricultural chemical at a time after they have been poisoning people and the planet for decades. Vilsack should announce his support for a requirement that chemical companies must prove new agricultural chemicals are safe before going to market. And if that feels too aggressive for the first 100 days, he should at least take the first step of saying that people have a right to clean food.

Announce a rapid-action task force with a near-term deadline for recommendations on how to do this. Engage the community and the communities that support them. Hold public virtual listening sessions so everyone’s voice can be heard.

In May of this year as a Covid 19 emergency measure, the FDA announced that in certain situations it would “no longer enforce” rules requiring companies to accurately state what ingredients are in their products. This flexibility was and is unnecessary. And, it endangers the millions of people with allergies to common foods like peas, mangos, peppers, and much more. From an economic standpoint, this illegal and reckless declaration has shaken consumer confidence in packaged food made in the U.S. It’s not good for anyone and should be revoked. What is the USDA’s interest? Truth in labeling is important for both food assistance programs like school lunch and for promoting exports, both solidly under the USDA.

6. Restore any integrity of the food assistance programs lost under Trump.

Millions rely on federal food programs to support the health of their families. And, during the last four years, the Trump Administration has been looking to restrict access to these programs and to decrease their nutrition benefits. However, during Covid 19 the USDA under Trump has been helpful according to the FRAC. Vilsack should look under rocks and quickly undo of any administrative harms enacted under the Trump Administration.

Best of luck to you, Gov. Vilsack. There’s a whole community of advocates in regenerative agriculture and food assistance ready to help you succeed. Let’s have your legacy be this. “In his tenure under Biden, Vilsack changed the guiding principles of all aspects of U.S. agriculture policy to better nourish people and the planet.”

Colleen Kavanagh is the founder and CEO of the first purity transparent packaged food company ZEGO. She seeks to inspire changes in the food system so it nourishes all people and our planet. Spending 20 years advocating for improved nutrition for children in positions, Colleen held positions in Congress and nonprofits. After moving to San Francisco, she started her own nonprofit, www.abettercourse.org, which continues still with Zetta Rieker at the helm. Colleen lives in San Francisco with her husband and has three children.